From Hong Kong we headed to Bangkok. We landed at the Sky Pier at HKIA by ferry from Macao  and had a seamless transfer into the airport facilities. We had to take two trains to get to the Thai airways lounge which was helpfully just across the  boarding gate. A short flight and Malati and I reached Bangkok for our fifth visit to Thailand. We had planned our visit in advance and had a  e visa in hand -though we had an option of a visa on arrival (VOA).

The Thai airways staff whisked us through immigration and we were on our way out in a jiffy past huge crowds waiting for a VOA – Reminded me of Mumbai suburban trains. As seasoned travelers we whizzed past all the touts and taxi services and headed for the local taxi stand  ( cheaper solution) and were soon on our way to the hotel. And while I was paying for the taxi I paid him 280 HKD instead of 280  THB . The driver gave me a great smile and I was pleased with the geniality of the taxi driver who pocketed a cool 250 HKD extra ! For the rest of the stay I used the local GRABTAXI , the Uber equivalent of Bangkok. Works well but with traffic jams on Sukhumvit and the limited number of taxis the service still has to mature .

We had no agenda except shopping for the little grandson. Our only requirement was a hotel with a metro access with easy connections to the shopping malls.We were traveling in peak season and the closest we got was the Sofitel on Sukhumvit very close to NANA BTS station.

On one of the days however we wanted to get out of Bangkok into the countryside – Our choices were the Kanchanaburi tiger temple or the Floating Market at Damnon Saduak . We opted for the floating market as we were taken in completely with the grand tourist photographs. On our way back from the Jim Thompson showroom a distance of barely 4 km the taxi charge was almost 150 Bahts. However the kindly driver showed us photos of the floating market – genuine authentic tourist brochures and offered to take us to Damnon Saduak floating  and back for 600 THB for a journey of  about 85 km each way ! We were taken in and fixed up with him for the next morning. I patted myself on the back for the great deal we were getting –

Later in the day when I did the, math it just didn’t seem to add up -3.5  Baht per km –  inclusive of tolls , surcharge and traffic . Something didn’t seem right! We called off this taxi   and took the safer option – A luxury Toyota car at a multiple of the possible con deal we just avoided. Damnon Saduak is about 90  km away from Bangkok mostly along Thai Route 35. It took us an hour to get out of the traffic and we got to the market in about two hrs time. The scenery was barren and nothing much to write about.

At the floating market we were greeted with a huge sign announcing 3000 Bahts (minimum charge)  for a two hour ride and a 4000 Baht fare for a three hour ride which included a circus of performing monkeys and elephants at an additional cost. A rip off given the condition of the boat – it was more of a dugout fitted with an out board motor spewing foul  diesel fumes.

The canal and its offshoots were built in the 1860s as part of an irrigation project which has since outlived its utility. However sometime in the 1970s this place was developed as a floating market tourist attraction – And it has evolved into a perfect tourist trap.The market comprises of  vendors in boats and shops on the banks of the canal accessible from the boat and is at its peak between 7 am and 9 am in the morning  though shops are open till late evening. The boat goes past these shops and there is compulsory halt at a shopping centre on the banks – Some Thai curios , food stalls , Thai spices and cheap clothing – T shirts , skirts , spices, scarves and the like. Very ordinary merchandise, high priced and poor quality. Some souvenirs too are available but the quality is suspect and you can get better stuff in Bangkok at cheaper prices too. Some of the canal side shops accept credit cards but add a  2 % service charge. Do  go along with the spirit of a tourist and pick up a few odds and ends. 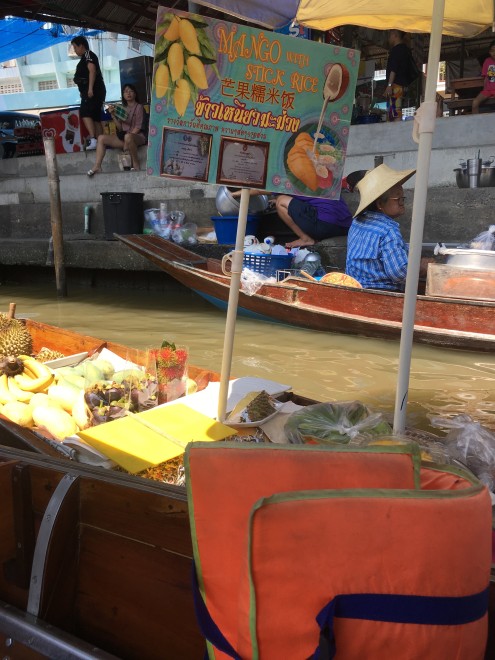 You must definitely test your bargaining skills – feels good if you have made a deal ! Malati picked up some spices as souvenirs and we were back in the boat to cruise the canals. But her prized piece was a mortar and pestle which weighed nearly 10 Kilos – For the life of me I could not figure out why she did not buy it back home in India. It was a good buy and back home in India the mixer has now given way to hand pound spices.  We stopped by a floating vendor for lunch and had the most amazing papaya salad – supposedly vegetarian but spiced with a lot of tiny pieces of shrimp. Hesitantly we ate a plate each and hoped that our stomachs would bear this onslaught – To our happiness we were fine and went on to  the next momo boat and topped off the meal with a coke with a Thai mango. The canal abounds with tourist boats spewing diesel  fumes which completely spoils the atmosphere – literally as well.

During the morning hours there are  numerous canoes selling flower vegetables and fruit and chattering away noisily in Thai. Most of these people come to the canal from the surrounding areas and then board a canoe.This was completely different from my perception – I thought these were boat people living on the canals! But then this is an artificially created tourist attraction. I would most certainly not recommend this place for a tourist to Bangkok unless one is doing some research on floating markets or has seen all the others. In fact to get a flavour of a floating market I would suggest the Taling Chan Floating market just a few Kms away from Bangkok. Also one does not have to wake up at an unearthly hour and travel nearly 100 km to Damnon Saduak.We drove back to Bangkok with a short stop at the train market at –Maeklong – Yet another created tourist spot .

The village market stalls are  set up on either side of the railway track.As the train approaches the carts which are on wheels and rails are pushed back and the polythene awnings are removed – We missed seeing the scurry when the train came but got a good idea of how it happens.When the train is not there the place looks like any other village market. Do try and be at the market when the train to Maeklong arrives. The Maeklong Railway Market train Schedule in 2019 is:

The rest of our trip was spent in the malls on Sukhumvit and we headed back home to India after a ten day break and into the peak summer of Hyderabad – This year we recorded 45 degrees centigrade.