Rome – The First Stop Part I

Our  first stop was Rome. After a caref

ul selection process  we selected to stay at The Hotel Mozart  on Via De Greci, one of the many lanes off Via Del Corso, the main shopping area of Rome. ( read my review of the hotel on TripAdvisor ). This is the heart of Rome and like most of the  streets and buildings has a history dating back to 2000 years, when this  road was built to link the city to the Adriatic Sea. Modern history goes back to the 1500s when the road became the high street of Rome during the time of Pope Alexander who is credited with much of then modern Roman buildings many of which stand even today.  The street is absolutely straight and links the Piazza Poppolo (Pee- aat- zaah)  at one end  to the Piazza Venezia  at the other. The road today is a no vehicle zone much like the Mall in Shimla and is home to most of the leading brands of the world.  There are numerous lanes which take off from the Via Del Corso and each of the lanes connects to the Via Del Babuino about 150- 250 metres away It is in this triangle bounded by these two roads and the two piazzas that most of the “must visit” sites are located. Distances being small walking is the only way to get around. Taking a taxi is a slower way of getting around and would mean negotiating cobbled one way streets which were meant for the Ancient Romans and  not modern cars! One can spend a few days just walking through these lanes. (Download  mytaxi app – the italian version of Uber).

On our first day in Italy we set out of the hotel after a late breakfast and we could see a large monument a few hundred yards ahead. This was the  Capitoline Hill and the monument of the unknown soldier known as The Piazza Campiglio and was designed by Michelangelo in the 1500s during the time of Pope Paul  III.

There now stands a replica of the  15 foot equestrian statue  of of Marcus Aurelius, one of the early Roman emperors mounted. The original was taken down for restoration in 1981 and now in a museum ‘ At the foot of Capitoline hill is the Piazza Venezia which is the central hub of Rome through which intersect  the major road arteries of the city. This Piazza was Mussolini’s favourite spot to address his fellow Romans Around this area there is enough to see and keep one occupied for  days of intense sight seeing .The Trojan Forum, St Mark’s chapel, Palazza Senatoria, and so on. But you needed to be a Roman History buff for that, which we most certainly were not . Of real interest to me  were the numerous side walk cafes around the Piazza and Malati liked the Gelaterias (ice cream parlours). So that’s where we went and left these monuments for the  more enthusiastic tourists. See picture along side Had to borrow it from a stock picturewith credits.  Don’t miss the grandeur of this place

While one can admire the beauty and grandeur of these monuments what struck me was there were no impatient drivers blowing their horns or pedestrians playing “catch me if you can” with the drivers – They used only the zebra crossings and therefore had the right of way . And drivers in Rome are considered to be most indisciplined drivers in Italy! Another aspect which impressed me no end were the complete absence of traffic policemen or even wardens to monitor the traffic All the discipline was ingrained into the drivers .Can we in India ever each such a state – I am reminded of my friend Nandu commenting on the the Hyderabad traffic  that while folks are in a tearing hurry to get to their destinations  they do not know what to do once they get there ! Such discipline does not have anything to do with economic affluence or education.

And so with a Gelato stop one set off to the Trevi Fountain ( Fontana De Trevi) a few hundred yards away. The Trevi fountain was finished in 1751 by Pannini whose name is associated with many of the  famous sculptures in Italy. The fountain  has been through three rounds of restoration(1988,98 and 2015) to remove the damage  due to  passage of time. The grand  restoration  of 2015  was sponsored by  the Italian fashion firm Fendi at a cost of 2.2 mn euros. I draw an immediate parallel to Yogi’s plan for the Taj Mahal and wish him success. The fountain has inspired some well known movies like Roman Holiday (Audrey Hepburn on a scooter), La Dolce Vita and Three coins in a Fountain( remember Frank Sinatra’s timeless song? ). It is said that who ever throws a coin into the fountain will return to Italy again – I did my bit to contribute to  this  collection stated to be 3000 Euros each day ! Malati didn’t want to come back. She said we will go some other place next time – But for now let’s get back to the hotel Its been a long walk and so it was – Back to the hotel through Via Del Corso but not before stopping at the H &M store which is possible the largest store I have ever seen in recent times.

Malati at the Trevi 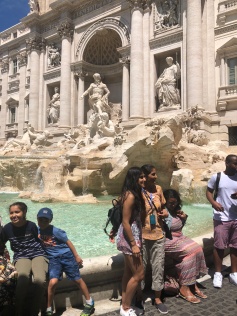 Back at the hotel we stopped by at the Sidewalk cafe Luna Doro  next door listening to music from the conservatoire across the road ( my Italian vocabulary is increasing !)I had my first taste of Proseco or sparkling Italian white wine. It owes it name to the town of Prosecco in Northern Italy and is considered a cheaper version of Champagne It has a GI tag or DOCG rating  similar to the tag for our Darjeeling tea or Champagne) and costs anywhere between 3.50 Euro to 8 Euro ( more about Proseco in my later posts ) and is the most common drink available everywhere in Italy . Italians do not have any problems with drinking in public places and are very smoker friendly as well – Public Ashtrays abound and are cleaned very frequently ,Bottles invariably are deposited in the trash bin and hard to find any careless thrown around.

Though the day time temperature in Rome was around a seemingly pleasant 25 C the sun was piercing. In Rome bottled drinking water is as expensive as a glass of wine – Side walk cafes serve them at 3.50 Euro though supermarkets are cheaper . When asked I was explained that the water in the bathrooms and even the local fountains is potable- We saw tourists filling their bottles from the fountains and roadside hydrants. However I still had some inhibitions (Indian?)of drinking bathroom water and through our Italian trip stuck to bottled water.

That evening we took a walk around the shopping area and had dinner in the rooftop restaurant at the Hotel Mozart On the chef’s recommendation I had monk fish. I must say it tasted delightful and the presentation was grand It was only later that I learned that monkfish is newly catching on in the culinary world and tastes as good as a lobster and that only the tail is to be filleted and eaten .The rest is poisonous and even the   USFDA had banned monkfish . Notwithstanding,  more Prosecco and monkfish made for a great meal.

A stone’s throw away from our hotel was the  Piazza De Spagna  which is also the start of the “Spanish Steps”. We crossed this place many times as it was the nearest taxi and bus stand as well as the metro station. 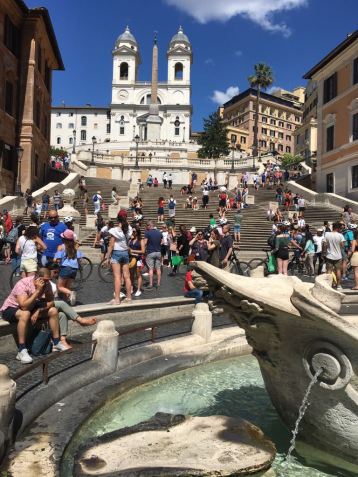 The steps link the Piazza De Spagna to the church of Trinita Monti.In the middle of the Piazza is the Fontana Della Barcaccia  (“Fountain of the longboat”) also a Bernini creation- named so  because a boat was washed ashore on this location during the floods of the Tiber . At one corner of the Piazza is a museum to Keats who lived and died in Rome in the 1800s as  did Shelley. The museum displays literary   memorabilia of that period. The education of English nobility was considered incomplete till they had spent some time in Italy imbibing its art and culture . Across the Piazza are large Showrooms of Gucci , Chanel, Armani, Prada all side by side overlooking the Piazza.Taking off from the Piazza is the Via Del Condotti  which is the big name shopping lane housing names such as Luis Vitton , Cartier,Tiffanny’s and the like. Needless to say prices when converted to Indian rupees were astronomical even after seemingly hefty discounts .

Still lots more to see and do in Rome but decided to take a short break and prioritize .