Hong Kong -Macau by bus on the HZMB

Macau  is a former Portuguese territory and Hong Kong  a former British  colony  till the  late 1990s. They are now Special Administrative Regions (SAR) of China and  their status will not change for the next about 30 years  – One nation two systems as the Chinese call it. From a tourist point of view Macau is the gambling capital of the world and generates a revenue of over 35  billion US dollars greatly surpassing Las Vegas. Hong Kong and Macau are located very close to each other and a tourist cannot  miss out  Macau  whilst on a trip to Hong Kong and vice versa .

Till a few months ago a well organized ferry system  was the only  connection between the two islands – Of course if  you are loaded you could take a helicopter  which costs about 30 times that of the ferry -Also Macau has an airport of its own connecting to major Asian cities .

All this is slowly changing with the bridge connecting Hong Kong to Macau and the Chinese town of Zhuhai – The Hong Kong – Zhuhai – Macau – Bridge or simply  – HZMB, – This bridge is the world’s longest bridge at 55 km in length across the  Pearl River estuary and opened to public in Oct 2018 . This is a stupendous engineering feat and I was very determined to use this route to get to Macau from Hong Kong on my recent trip.

On either side of the bridge are the Hong Kong and Macao Bus terminals on reclaimed land known as “Boundary Crossing Facilities”. Two artificial islands in the middle about six  km apart are connected by an underground tunnel so as to  allow free movement of ships  on the busy Pearl River Delta shipping route. I was  told that the bridge, apart from an advanced monitoring and surveillance system also had yawn monitoring capabilities – If the driver yawns thrice the authorities are alerted. Seems plausible in China  but a bit far fetched I thought !

Considering that the bridge is relatively new and still not well used by tourists there is  not enough information easily available. Most of my search directed me to the time tested ferry system – A one hour journey across the sea on the Turbo jet from the Macau Ferry terminal at Schengwan or Kowloon. The concierge at the hotel too tried to dissuade me from taking a bus and suggested the ferry instead.  Not withstanding I persisted and here is my account of the bus ride to Macao.

Taxis are not permitted on the bridge and limited number of private car permits are issued.The only means of crossing is by public bus. There are  two ways  of getting to Macau by bus  –

Cross Boundary coach From Kowloon  Elements Mall– The bus takes you directly from the Parking lot at the Mall to  select hotels in Macao- These buses are referred to as Cross boundary(border) coaches. 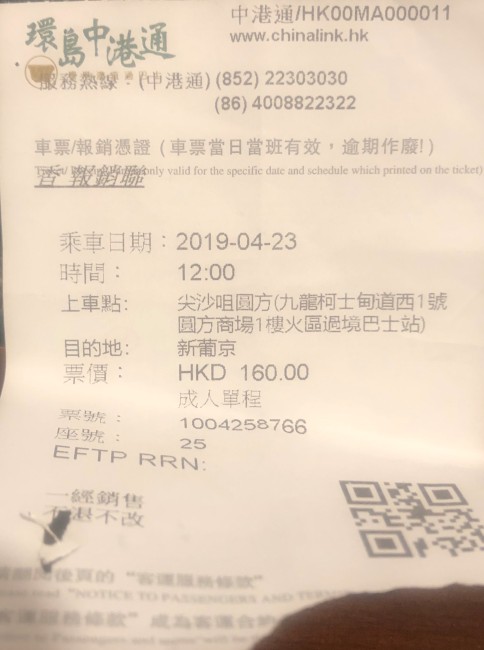 The cost of  one way  ticket is 160 HK Dollars and available on the spot.  These buses offer the advantage of a hotel drop   at Macao thus saving on the taxi/ bus  and time. In this option you have to get off the bus with your baggage  at the Hong Kong Boundary crossing terminal, get past immigration and board the bus on the other side at a specified parking bay – All in 20 mins – This could be bit of a challenge with heavy bags and the long walk in a massive  terminal . The announcement was not very clear and we had to do a bit of asking to find out the bus bay number. Mostly Chinese passengers who speak no English! The bus  continues it journey past the airport, onto  the bridge to the first island, enters  the six km long  tunnel and emerges at  the  second island before finally heading to the Macao Cross Boundary Terminal. At the Macao end you once again go through immigration with your bags and board the bus on the other side. Here also only 20 mins to get past immigration, go through three  levels of escalators and find your bus bay. The bus drivers are not  sympathetic towards latecomers  and have no hesitation in leaving them behind. A great way to get to Macau if you don’t mind lugging your bags across immigration twice. The advantage is that you save on taxi fares in Hong Kong from your hotel to the bus terminal ( nearly 250- 300 HKD from Kowloon ) and a doorstep drop at the hotel in Macau.We chose this option.We boarded the bus at Kowloon and got off at our hotel which was one of the drop off points in Macau.

Shuttle Buses from Hong Kong Boundary crossing Terminal – You first need to make your way to the boundary crossing terminal on your own. The terminal is an artificial island a few kms away from the airport off Lantau Island. First cross the Hong Kong immigration  and then buy a ticket to Macau – There are many vending machines and ticket counters where you can buy a shuttle bus ticket for 70 HKD  for a single or double decker shuttle bus  which operate on a frequency of about  15 mins. Follow the Shuttle bus signposting for Macao  buses. These buses are called Shuttle buses and are not to be confused with cross boundary coaches which are parked a different bays. Do keep in mind  that buses for Zhuhai also depart from the same terminal. The route followed by the bus is the same as mentioned above but drops you off only at the  Macao Cross Boundary facility(bus terminal)  from where you make your way past immigration and onward to your hotel by bus or taxi.

It takes about 45 mins in all for the bus to cross the HZMB and I was very thrilled to be riding  on such a master piece of engineering. The sheer size and scale of the bridge and the massive cross boundary facilities on artificial islands both at Macau and Hong Kong left me in awe! The scenic  drive through the sea gives  spectacular views of Hong Kong and the Macau skyline.And i got to see the bridge in perspective from the ferry on my return journey. I would definitely recommend this experience for first timers to Hong Kong and Macao.