After a pleasant walk  from the Kiyomizudera temple through the alleys of Higashiyama we headed to Gion. Gion is a well frequented must see tourist district and is known as the geisha district of Kyoto. The main street of Gion is the Hanamiko Dori which is lined with numerous traditional shops and eateries. It is also the home of  geishas. These geishas entertain guests at  the many  sophisticated restaurants that line the street   and  resent being hounded by paparazzi but  Malati was able to get a distant shot of a lone geisha.

The shops provided us some interesting options and we settled for hand crafted  Japanese bamboo paper which makes for good souvenir for folks back home. We also picked up a traditional Kimono for my daughter. In our true Indian style we asked whether the colour was fast and would not run  with a wash. The much indignant shop keeper proudly informed me that it was made in Japan!

Gion Corner is on the main street and  hosts a popular theatre show offering insights into some of the Japanese traditional arts. Tickets are fairly expensive at a 3150 Y per person and spot tickets are available.  There are no elaborate sets or showmanship but a simple display of different Japanese arts. We were treated to a Japanese tea ceremony , Flower arrangements , Bunraku or puppet show  all set to local Japanese music. 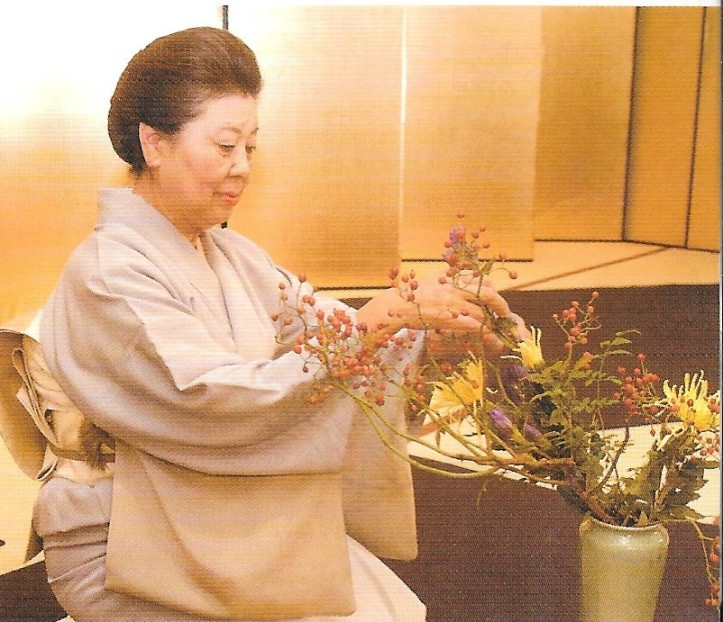 The theatre  was a comfortable place to rest our legs and the show did give me an opportuntiy to nod off for a few moments. After the show we headed  to Kyoto station and traced our path  back to the Marriott at Osaka but not before sampling the masara curry and rice at the Kyoto station. Tried to figure out the purpose of the token machine at the entrance to the restaurant which at first seemed to me to be an unnecessary use of technology ! However I figured during my meal that it was a good way for the owner not only to   keep his accounts but also eliminate any cash transactions by the staff and perhaps even do away with a maitre and a restaurant manager. In sharp contrast, as I am used to in India there would be a doorman, a manager and a cashier as well.

I had a bit of a problem with my ankle as I had slipped during the day on the walk down from the Kiyomizudera temple. While the staff at the hotel were very helpful with a spot massage, pain patches and icepacks  they were most reluctant  to call for a doctor. They insisted that no medical help can be provided as there were very few English speaking doctors in Osaka at that time of the night. Even more surprising that the hotel did not have a doctor on call !   I didn’t probe this further but I learnt that there were very few English speaking doctors outside of the main cities of Japan.

Mercifully the pain eased  the next morning and with a few painkillers from the nearby pharmacy  we made our way back to Tokyo on the Shinkansen and then on to  our hotel in the restaurant district of Shinjiku   for the last few days of our trip.