With so much media coverage Hong Kong I was  a bit apprehensive of visiting Hong Kong   to attend  my son Jayant’s graduation. Jayant however reassured me and simply summed it up with a one liner  – “There is no trouble unless you go looking for it”. What it really meant I did not fully  understand but found that Hong Kong  was very peaceful and life was normal.

I further learnt that  protests are limited to some areas  and only on weekends so as not to disturb the daily life. Great  protest discipline I must admit! All traces that I found were limited to some graffiti in Sheung Wan. Maybe not a correct assessment of the political situation but I speak as a short term tourist! Sheung Wan in Central Hong Kong was where the earliest Englishman settled. A lot of the area has since been reclaimed and the boundaries of Sheung Wan have greatly extended from the time Hong Kong as known as Victoria. I chose   an apartment hotel with a large room even by Hong Kong standards on  Jervois Street. My curiosity led me to discover that Major General  William Jervois was the Lieutenant governor of Hong Kong in 1851 when a fire engulfed parts of Sheung Wan. Bonham Strand, another  major street  is named after Governor Sir Bonham in whose time the le subsequent reconstruction  happened.So also many of the roads in Sheung wan are named after British functionaries.

From our hotel we took a short walk – barely a few hundred yards via Cleverly Street)   and up the steps to  the Man Mo temple on Hollywood Road. There are many Man Mo temples in Hong Kong but this one is the largest and most well known. 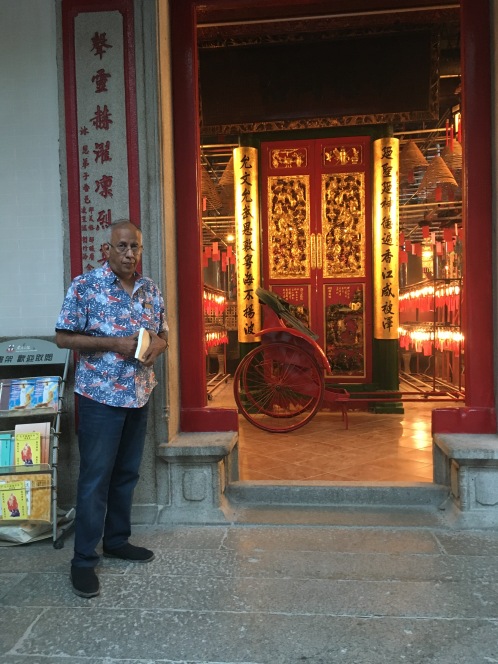 The temple is dedicated to a “civil” god Man Cheong  or the god of literature and a “military”  god Mo Tai, the   god of martial arts. This temple  has been the goto temple for Chinese for success in examinations! The temple comprises of three main buildings and prayer halls each ornately carved and decorated with Chinese symbols . A cherry blossom tree in the complex has strips of paper tied to it indicating wishes granted or sought.Sadly photography was not permitted inside the three halls which house some beautiful works of arts. 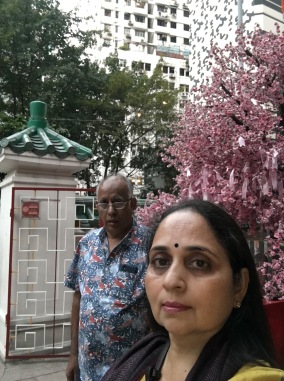 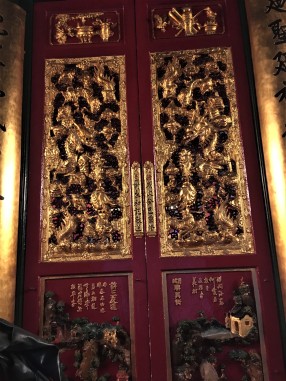 After admiring the calm and serenity of the place we set out to walk down Hollywood street-one of the oldest streets in Hong Kong. It used to be the place  where European  sailors would sell  antiques and Artefacts collected from China-possibly plundered. Today one can buy trinkets and artefacts from pavement sellers and  art de objets from the many galleries located on the road. Noticeable was  that these  galleries were all equipped  with high security entrances perhaps indicative of the value of the  antiques and jewellery housed in there>

A quick cup of tea at one the numerous eateries  in Sheung wan and we headed to Tsim Sha Tui in time for the evening show of lights. A smooth crossing over the bay on a Star Ferry took us to the pier at TST.

We were lucky to catch a show promoting  local Hong Kong talent in the amphi-theatre . There was also an amazing display of talented  busking singing both Chinese and English songs. We  did spend quite some time encouraging the artistes both young and old. The Symphony of Lights which is a play of lights across both sides of the  harbour is an event which must not be missed.  To get the best of it you must watch the lights from both sides of the harbour on two consecutive nights . 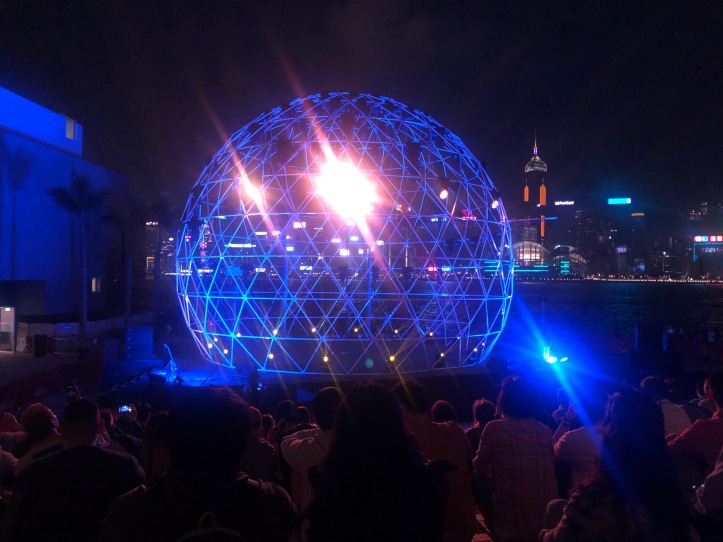 A short Star Ferry ride and we were back in Sheungwan. We walked through Koshing street just a few yards away from our hotel.

The street is also referred to Medicine street and all kinds of herbal and other ingredients of medicinal value are sold. These ingredients are then conjured up into a vast range of potions for every possible ailment. Jayant was complaining of a sore throat and a headache and he claims that the customised potion made by the medicine woman worked wonders for him. Dinner that evening was at a French bistro The La Creperie where we were served a delightful spread of savoury and sweet crepes(do check out my review on Trip Advisor).  We rounded off the evening with a stroll past Sheung Wan square and headed back to our hotel.

Sheung Wan has been a delightful place to spend a few days  and I was  very glad that we picked our hotel there. Sheung Wan has so much to offer – We sampled many eateries  and bakeries and visited the tourist spots all within walking distance. But then there is a still a lot more about the area to discover and experience which perhaps we will leave for our next visit.