One of my  biggest worries when I travel to a new city for the first time is the commute from the Airport to the Hotel. After a long and tiring flight I  prefer to head straight for the hotel. I normally take a taxi from the Airport to the hotel, dump my bags, freshen up and am ready to explore the city. A  bit expensive but provides a good start to the visit. And so I thought Tokyo would be similar- But the prohibitive costs of  around 12 to 15000 yen – Due to distance as well as the  expensive Tokyo taxis made me rethink. Landing in Haneda airport which is closer to town  was   a possible solution but my airline  schedules  did not permit.

Narita airport is about 70 kms from Tokyo down town and there are three options available to  tourists – The Narita Express (NEX) run by Japan Rail (JR), the Keisei- Uno Skyliner express run by a private operator  or a Limousine coach. All these services operate at frequent and convenient intervals. Ticket counters at the airport terminal are clearly marked and easily accessible. One way fares are 3250 Yen for NEX, 2250 for the Skyliner and 3000 for a coach. 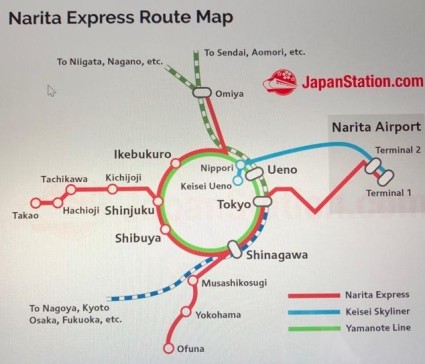 The NEX takes you to the major hubs of Shinjuku and Shibuya Shinagawa and Yokohama and onward. The train splits  in Tokyo station (See map). The Skyliner is a faster train and takes you to Ueno. The Limousine coach has an advantage of a doorstep drop at the major hotels along many different routes but takes much longer. All these options  display thoroughness and efficiency of operation and exceptional cleanliness besides of course being very passenger friendly.  And as we journeyed  further into Tokyo and into Japan we found   many such examples of  what I would call the  Japanese customer experience.

Another  striking feature  across  Japan is the quality of the signposting – Both in English and Japanese – Easy to understand and precise – nowhere else in the world have I come across signs showing distances marked as ESCALATOR 32 m! Japanese eye for detail or obsession for precision? And so traversing through the large airport was a breeze and I did not need to use what I refer to as   “The Dear Brother Routine” (Literally translated from Hindi usage – dear brother can you give me directions to xxx ). Our destination was the Oakwood Hotel close to the Shibuya station. Ueno, the terminus of the  Keisei Skyliner was about five kms away  and so were the designated stops of the Limousine coach. And thus by a process of elimination we chose the Narita Express to get to Shibuya.

The NEX is a fully reserved train with  very convenient seating and ample luggage space. The luggage rack has a easy to use digital locking system. And don’t worry if you forget the code. There is solution for that.

Just listen in to one of the many clear and informative passenger /  service  related announcements in both English and Japanese.     I felt very reassured and well informed  with these periodic announcements on the PA system as well on the display board in each car. The train was spotlessly clean and  was also my first experience of a Japanese wash-let. Technology applied to the bottom !  Enroute at  Tokyo the train stopped for a while for the Yokohama bound  coaches to be detached and we were in Shibuya dot on time in just over an hour as compared to two by a limousine coach.

A short taxi ride took us to  our hotel the Oakwood Aoyama  and  we settled into  a most comfortable and well furnished room. I spent the rest of the evening figuring out the buttons and Japanese instructions on various gadgets and switches which included a detailed study of the washlet – Would come in handy for the rest of my stay in japan.   And as if to   welcome us  to Japan the skies were unusually clear the next morning and gave us a glorious view of Fujiyama from our bedroom .