Continued from my last post -The Black Rooster of Chianti

Onward from Florence we had many choices – Visit North West  Italy – Genoa and onto the French Riviera  or Milan and Lake Como onto Switzerland or Bologna and Venice . The glorious stories of Venice starting from the  Merchant of Venice to the  gondolas , the water buses and Venetian cruise liner stories made the decision for us .Sadly we had to drop all these options and head towards Venice and planned our exit out of Vienna airport, a few hours away from Venice .

The Flixbus company  website  boasts of 300,000 connections and 1700 destinations across America and Europe .  With such a vast network a thought crossed our minds – Why not do Europe by bus – Three to four  hour hops between most locations – So we decided to check out the bus service -Venice was about three hours away and the route would pass through Bologna , Padua and Venice. 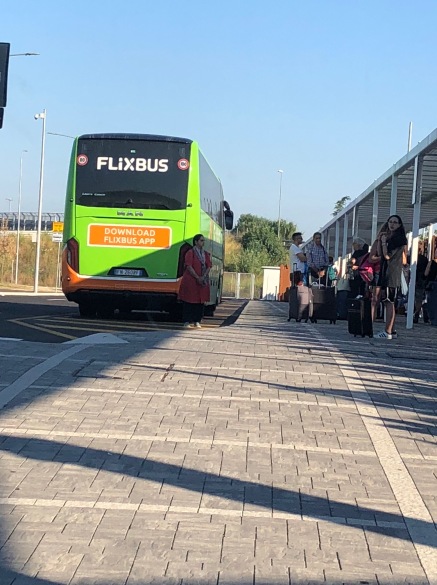 We got tickets for under 10 Euro each  and the taxi fare from the hotel cost more than that -Not only are Florentine taxis expensive but Villa Costanza , the long distance bus station  was on the outskirts of the city . We took an early morning bus and stopped by at the bus station cafeteria which offered us the best croissants we had in Italy ever  !  The bus arrived on schedule and we were soon on our way to Venice via Bologna which is the halfway point. Bologna is a modern industrial city as  also lends it name to the sauce served in a Spaghetti  Bolognese- though the locals do  not use this in spaghetti  at all – Or so I was told by a young co passenger! The scenic route took as through the Appenines – a range of low mountains .The buses were extremely comfortable and reinforced our idea of traveling on a bus across Europe.

The commune of  Venice (Venezia  venee-tz-eeyah to locals) comprises of the Mainland Venice known as the Mestre ,  Padua and Treviso and the island area known as Centro Storico.The Centro Storico or the group of islands are connected to the mainland Mestre by a 4 km long bridge known as Ponte della Liberta and runs alongside a rail bridge which terminates at the Santa Lucia Station on the islands . The airport of Venice is named after Marco Polo , a native Venetian and  famous explorer. The airport is located on the mainland  and first timer tourists are unable to visualize the difference between the Mestre area and the island area,  which is the home of all  tourist spots .

The island area of Venice comprises of 118 small islands , 177 canals and 400 bridges and is a no traffic zone.The train terminus Santa Lucia  is at the start of the islands and the Tronchetto , a large man made island created in the 1960s for

parking  is the last point for vehicles . Thereafter it is either on foot or on water transport – water taxis, water buses known as vaporetto and gondolas . We got off the Flix bus onto throngs of cruise tourists -and made our way to the water-bus stop. Water taxis are frightfully expensive and take about 80-100  euros and more for a drop at the hotel traversing through the myriads of canals  . Venice receives  twenty five million tourists each year and the permanent population of the Island area is only 55000 .Venice is also a favorite cruise destination.Cruise ships disgorge huge number of tourists who barely stay a day in the city . This huge influx of tourists has   caused immense discomfort to the locals – The government  valiantly attempts to balance the inflow of tourists and their revenues  with the local requirements. Some of the measures in place are limiting of the size of cruise ships , banning  further addition of hotel rooms , curbing fast-food joints and hard wheels for trolleys.The government even considered banning   suitcases with wheels a few years ago!

We got off the Flixbus at  the Tronchetto and  made our way to a water bus stop some distance away . The ‘vaporetto’ bus stops are floating piers resting on pontoons and very well signposted.  The main routes are Line 1 and Line 2 which traverse the entire length  of the Grand canal and the island in a circular route .While the route is  nearly the same the routes differ in their stops which are on either side of the canal and have a common stop only at Pizzale Roma – the main terminus for water buses . If you get off on the wrong side of the canal there are gondolas available for a few Euro. The Grand Canal is the life line of Venice and cuts right through the middle . The Canal can be crossed at very few places  , the Rialto bridge being the most well known ,  and has offshoot canals leading into different localities of Venice much like by- lanes in our part of the world !

With detailed instructions  from the hotel , we took the Vaporetto Line 1 to Pizzale Roma the main water bus  terminus , changed to Line 2 and got off at Ca’Doro stop and made our way to the hotel past the  Strada Nova  , a wide shopping area and thence through a narrow Venetian street Calle Velli and across a   canal on one of the many foot bridges.All this in barely   150 yards .   I must admit it was a bit of challenge to lug our bags across the bridge but

we managed it some help from a passing tourist . We had booked into Hotel Uno (check out my review on TripAdvisor) which like most hotels had its own private boat entrance as well .The hotel was well located on a spotlessly clean cobbled street in the upmarket area of Cannareggio , which is bordered on one side by the Grand Canal and the Fondamenta Nova  , the sea front on the Adriatic sea on the other .It is home to many hotels , and churches , the mist notable being the Chesia de Gesuita and the Chesia de Santa Caterina both beautiful works of architecture and  symbolic of the great merchant history of Venice

We dumped our bags in the hotel and set out to explore Venice.The hotel staff plied us with all kinds of guides and maps accompanied with an advisory – “There is  great charm in  getting lost in Venice” -Huh! I thought , given my good sense of direction and Google maps. We set out onto the Strada Nova and walked through the streets of Venice – Every few yards the name of the street- more like alley,   changes and Google maps have a small margin of error and a slight latency  . While this is manageable when you are driving it does become vexing for pedestrians – Besides constant map reading  is a complete  distraction   from looking around .And so we dumped the google maps and as foretold by the  front desk manager a  we truly got lost , And therein lies the charm of Venice – We came across some beautiful merchandise notably leather and fashion impeccably showcased.Every few yards was a Gelateria or a street walk cafe but what really took my breath away was a chocolate shop called Captain Candy . 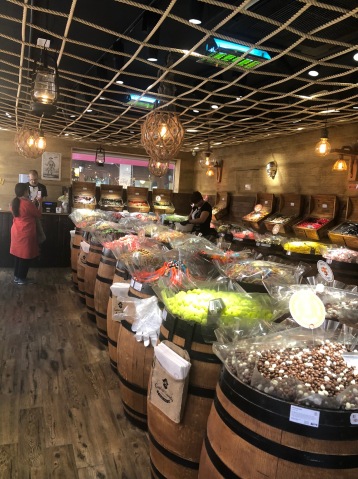 Simply pick up disposal gloves and dig into the Chocolates to your choice. Such a wide range makes even this simply task very difficult.Chocolates are then weighed and paid for much like vegetables in department stores !

And with a few more stops at the Gelateria , a street cafe and a leather goods store we found ourselves at Rialto bridge. Aunt Google said we were 450 m away from the hotel but after walking for another 15 mins we found ourselves at Rialto bridge again .Then using the best navigation aid – local shopkeepers we found ourselves back at the hotel after a quick stop for dinner of Pizza Margarita . Of all the varieties of Pizzas that we tried in Italy we found that the Pizza Margarita was the safest and best option.Served with a  generous topping of cheese ,sizes vary between nine and twelve inches !

The next day we set out to  Piazza San Marco -St Mark’s Square . the center of all attractions in Venice . Wisely we kept the phone in our pockets and followed the  hordes of tourists heading towards the square.  The  Palazzo Ducale( Doges palace) , San Marco cathedral , the Campanile and the Museo are all located around the square. Innumerable shops and street walk cafeterias serving  live music dot the square.

We started with the Basilica of St Mark which dates back to the 800s AD when the Venetian merchants stole the relics of St Mark from Alexandria and installed it here. The basilica was originally a private chapel of the Doges (dukes) who ruled Venice from the 800s to 1700s .  Over the years it has been improved upon and today presents a very majestic structure It is often referred to as Chiesa D’Oro- church of gold for its exquisite exhibits and mosaics of gold . The walls , the floors and the roofs of the basilica are a great display of art , elegance and riches down the ages and can’t all be absorbed in one visit . The Campanile or bell tower is located adjacent to the basilica much like those we saw across Italy. It took us over an hour to enter the Basilica and were wowed by the interiors .No photography was permitted inside the Basilica.

The next stop was   the Doges Palace – The Doges were the senior most elected officials of Venice and were ruling Venice from about the 800s to as late as the 1700s. The Doges were similar to Dukes but without hereditary rights -The Place of the Doges is known as the Palazzo Ducale is connected to the   the Basilica of St Marks and overlooks the sea .Today there is a crowded  promenade which houses the ferry stations of different routes and water bus services. The Palaza Ducale  was first occupied around the 800s and extension, up gradation and refurbishment continued through till round the 17th century.The Doges were elected leaders of Venice through the great period of Venetian ascendancy as a mercantile city till the fall of the Venetian republic in 1797 and then went through French and Austrian Rule before becoming a  part of Italy in 1866.

During this period the palace was the most happening place in Venice and the grandeur built over the years is reflected in the courtyard ,   works of art of the Venetian masters adorning the wide imposing staircases  and the grand state meeting halls. A lot of this reflected in the  museum and one gets a good idea of the style and elegance of Venetian gentry . While every room and exhibit in the palace is resplendent with the opulence Of particular interest is the Bridge of Sighs. The Bridge of Sighs is a translation of Ponte de Sospiri  and is an arched bridge   which spans over a canal and leads  into the dungeons . The story goes that through the latticed walls the convicted prisoner could get a last glimpse of his beautiful Venice and would invoke a sigh – Hence the name !  And the translation is attributed  to  Byron in his famous poem “Childe Harold’s Pilgrimage “I stood in Venice, on the Bridge of Sighs; A palace and a prison on each hand.”

And so after a long  day  and  visiting two of the most famous sights of Venice we set back to the hotel but not before we polished off a Chianti Classico and large Pizza Margerita .  Our plan for the next day was to do Venice by boat.

Continued in my next post – Venice by boat – No walking!