The Leaning Tower of Pisa

Tuscany is a province of  of Central Italy.   and   is  known for its beautiful landscape , art , architecture and culture , great food , wine and even fashion .  Florence is the capital of Tuscany and the most prominent town. Other  renowned towns  frequented by tourists are Pisa , Luca, Chianti and Sienna.

Italians drink their cappuccino lukewarm. My refrain at breakfast  every day was always a request for hot coffee  often to no avail  except 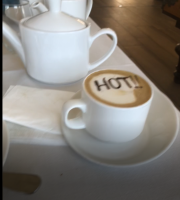 in Florence where I was delighted with a Cappucino  thoughtfully inscribed! And so after a sumptuous breakfast and  a HOT cappuccino  at the roof top restaurant at the  KRAFT Hotel ( check out my review on TripAdvisor) we set out for the town of Pisa . Malati was not keen on going to Pisa as we had a lot more on our Florentine agenda . We had as yet  not  walked the by lanes  of Florence ,the Cathedral of Santa Maria  was  was still on   our to do list   and the country side of Tuscany was beckoning .

I first heard of the Leaning Tower of Pisa from my high school physics teacher who very vividly described the experiment  on falling objects conducted by Galileo from the Tower of Pisa -He(Galileo)  proved that irrespective of the weight of the object  they fall to the ground at the same time (discounting air resistance). This was  almost seventy years before Newton published his Laws of Motion -This was a very revolutionary idea and Galileo was censured by the church for this and other “heretic” concepts . And then Gary ( Garibaldi ,the physics teacher so nicknamed for his bald head ) proceeded to take  us through  those dreaded numericals  of  height,  incline ,    gravity etc all centered around the Leaning Tower of Pisa   which we learnt was about 200 ft high and inclined at 4 + degrees .Later on during my  engineering education we learnt about differential settlement of foundations and methods to correct them using the Tower of Pisa as one of the examples . With such  memories how could I miss visiting the Tower- more so when we were so close ?

And so Malati was over ruled and we decided to go to Pisa – We agreed that we would just head straight for the Tower,  take a few pictures and get back as fast as we can to continue the day in Florence .Pisa is about 80 km from Florence and is very well connected by train and bus though the preferred mode  is the train.

There are over 50 trains a day between the two and cover the distance of about 80 Km in less than an hour.And so by now, well familiar with the Italian Trains we  hopped on to a train to Pisa and and thence by a local bus to the Tower (Torre to locals). The tower is situated in a walled enclosure called the Piazza dei Miracles or the Square of Miracles -there are four main structures here namely the cathedral or duo mo ,with the baptistry , The campanile or the bell tower build adjacent to the cathedral (leaning tower)and the monastery.This is keeping in with the then [prevalent architecture of having a bell tower away from the cathedral as we had seen in Venice , Florence and Rome The area is now well grassed and has a museum as well  besides being declared a heritage monument by UNESCO.The photo above shows a view of the baptistry from outside the walled enclosure of the Piazza of Miracles.We are just outside the wall of the Square  of Miracles and could not spot the tower till we went inside and there stood the majestic tower

At first glance it looked straight to me ! The Tower is seven storeys high and took 200 years to build.  Construction was started in the 1100s and three storeys were built when the tilt was noticed .Work was stopped for the next hundred years due to various reasons during which time the foundation soil had settled and fresh construction attempted to correct the tilt .The seventh floor was the last to be  added and has seven bells each with a different tonal sound .However in the 1960s the Italian government attempted to straighten the tower but not by too much since it was an important tourist attraction!The tilt was partially corrected and the tower has been declared safe for another three hundred years . After a few photographs and a walk around the beautifully laid out gardens we headed back to Florence for more sightseeing . 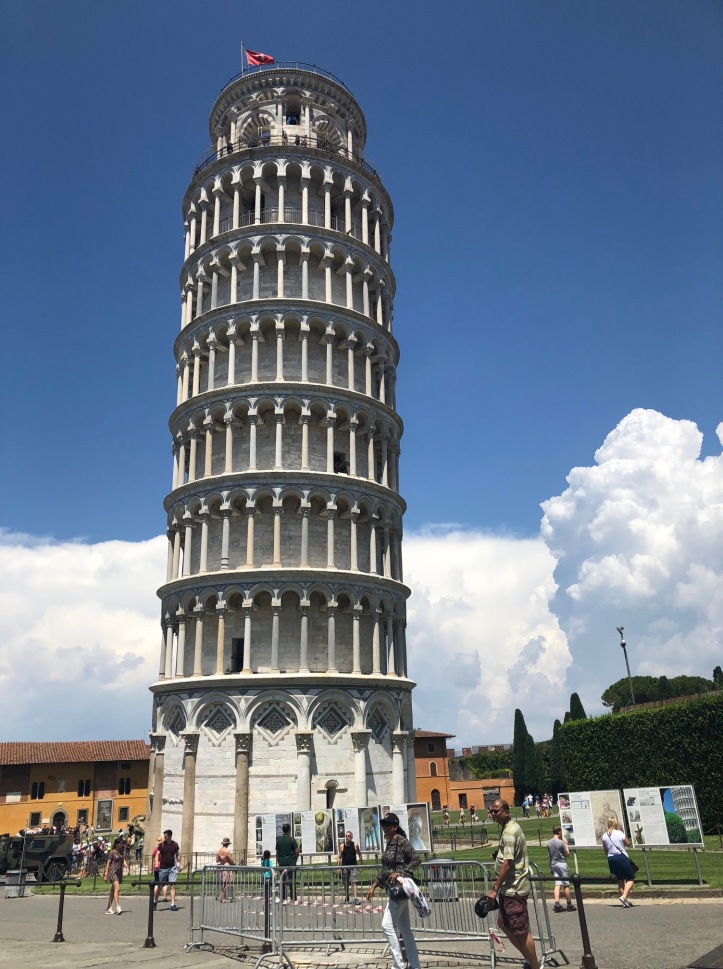 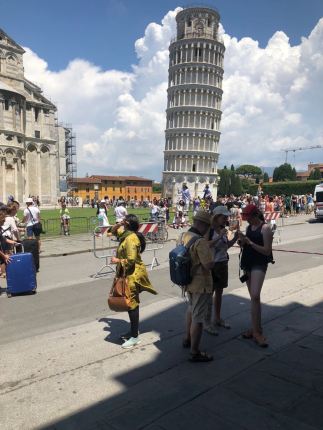 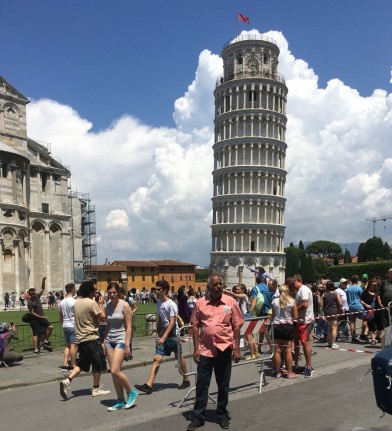 Continued in my next post – The Black Rooster Of Chianti