Ninety minutes out of Shin Osaka  and we were in Hiroshima. Hiroshima is  like any modern Japanese city but our only interest was to see the spots related to the Atomic bomb.

We took a short ride on an electric Tram to Genbaku  Dome -Mae or simply the Atomic dome stop. Across the road from the bus stop  is the Peace Park  where  most of the sites of our interest were located. The Peace Park area  is located within a triangle formed by the two branches of the Motoyasu River and the Peace Boulevard  covering about 120000 sq meters. It was the industrial and commercial  district of Hiroshima before the bomb  but has now  been preserved as a symbol for peace.

The first structure that meets  the eye  is the Atomic dome or  Genbaku (atomic bomb) dome or simply the A- dome.   This building was constructed in 1915 and housed the  Hiroshima Prefectural Industrial Promotional Hall.

It is the only building that was left standing after the Atom bomb was dropped on 08 Aug 1945. Whilst all the people were killed in the blast this building  survived since the hypo center or ground zero was almost directly above the building. Though initial public opinion was to raze the building the city fathers opined that these ruins be preserved in exactly the same state they are in to remind the people of the ravages of a nuclear explosion and a symbol of hope for future world peace. And this is the theme that runs across the entire park – That they have seen the horrific results of a nuclear explosion and may it never happen again. Revenge could have been  accepted as a  possible response but the Japanese took  the holocaust in their stride and have literally grown out of the ashes of World War II and emerged as an economic  super power.  The Aioi river bridge  is alongside the dome and was the original intended target of the bomb ( see photograph below)

Just south of the A – dome is the monument to students who died in the bomb blast. The 12 metre tall structure remembers the  mobilised students who lost their lives on 06 August. The monument came up late in 1967 and was set up by the survivors of these  mobilised students. Mobilized students were  those high school students who were drafted to help  in the war effort as all the adults were away fighting the war. Nearly a thousand of such children in the neighbouring schools died on that day and their memory is kept alive by their fellow students who survived the blast.

We walked on past  well manicured gardens along the river  to a beautiful cafe overlooking  a pier from where a boat service to Miyajima operates. After lunch we walked over the only  bridge which survived the impact onto the Children’s monument.

The Children’s Monument has been inspired by the story of Sadako Sasaki who was two years old when the bomb was dropped. She lived a normal life for the next ten years till  the effects of radiation resulted in leukaemia and her death. During her illness she made origami paper cranes. Her classmates inspired by this started a paper crane club which ultimately lead to creation of a monument in her honor in the Peace Park entirely funded by children. To this day paper cranes, considered a symbol of peace  made by children all over the world  arrive at the monument and  are displayed in the stands beside the monument. Atop the monument is a young girl who holds a golden crane .

Continuing our walk in the Peace Park we passed the Atomic mound. The mound is located at the spot where the corpses of the dead were cremated. The vault is said to contain the ashes of 70000 persons. Many of the ashes are still unclaimed as families were wiped out and there were no claimants .

Past the mound  we come to the   ‘Memorial Monument for Hiroshima, City of Peace’, but well  known as the Memorial Cenotaph. The memorial  built in 1956 is shaped

like an arch  believed to provide shelter to the souls of the dead.  The names of all the dead are inscribed inside the stone chest in the middle of the monument. At last count the number was around 300000 and the inscription on the monument reads “Let all the souls here rest in peace; For we shall not repeat the evil.” Very apt and touching!

There are many other statues and monuments in the Peace Park-  a more complete list can be found in the tourist brochures available in Hiroshima. But the most important feature is the Peace Memorial Museum. Nestled among very well kept lawns, embellished with statues and fountains the Peace Museum highlights the horrors of the bombing and some of the exhibits move one to tears.

The  well organised  museum is  divided into various sections starting with the history of Hoiroshima.  Other sections  depict  the devastation that was caused by the atom bomb with  a   moving 3D visual  as the centre piece. The bomb killed about 70000 people instantly and the death toll went up to 150000 in a few months. Many more died in subsequent years due to effects of radiation. The bomb flattened out an area of about 2 km in radius and damaged much more. The exhibits vividly bring out the suffering and the pain including that of little children embellished with survivor testimonies. The final section brings out the events leading to the  planning  and selection of the targets and the flawless  execution of the new technology of the  Americans. It forced a surrender of Japan and brought about an end to the World War but later day  evidence proved that Japan was already crushed and there was no requirement of such destruction! Some extreme views even called the Americans war criminals for having executed so many innocent civilians including children.

But the recurring theme of the city of Hiroshima one sees in every aspect and monument of the   Peace Park is  one of peace and a prayer that never again should any one be subject to such devastation and suffering. Commemoration and condolence ceremonies and meetings are held very year  which keep  reinforcing this theme.

From the museum we walked onto  the Peace Boulevard and we  were back  on  the next Shinkansen  to  Shin Osaka but not before sampling some of the delights of Hiroshima station. Of particular mention are  the cup cakes at the Hachijo   exit of the station. 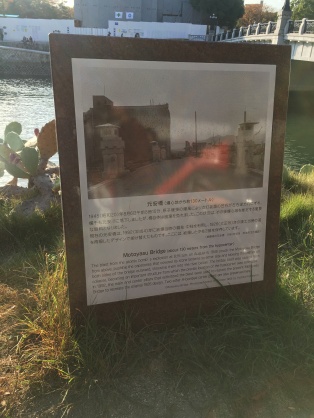