We landed into Narita and made our way to our hotel in Shibuya.The first evening was spent at the hotel deciphering  the signs in the room and the gadgets. The Oakwood Aoyama was great place to stay and was a perfect example of  how all the amenities one requires in an apartment can be stacked without clutter. Of course all the signs in Japanese did puzzle me till I figured them out. Clear skies greeted us  the next morning with  a view of Fujiyama from my bedroom.

The WiFi box which we picked up at Narita was to be our constant companion through our stay in Japan. No bigger than a cigarette box it was great option to remain connected. The only down side was that I could not download the DIDI taxi app as I had no telephone number to receive the password. DIDI is the local taxi aggregator and   costs are  at least 20 – 30 % cheaper than UBER in Tokyo.

And so well rested and WiFi enabled  we started our first day with a metro ride to Shibuya station – Two stops away on the Ginza line. 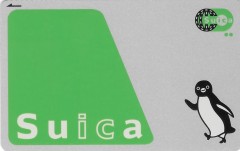 We  got ourselves a SUICA card each from the JR ticket vending machine. The big black machines did prove  quite daunting in spite of my having watched an instructional video. I got puzzled  with the GET SUICA and GET MY  SUICA options. After struggling with the machine  a kindly  JR official helped us out. It was later that I learnt that  a lost MY SUICA card could be replaced  but not the SUICA. The SUICA card proved extremely handy through our stay in Japan for metro travels. The card also acts as an electronic wallet for use at vending machines, food carts on trains and some select outlets including Seven Eleven stores.

Having been brought up on American pulp fiction where every crime investigation had some connection to a Seven Eleven store it  was a revelation to learn that  Seven Eleven is now a Japanese company! And that of the 70000 such stores (called conbini or convenience store ) across the world nearly a quarter of them are in Japan and in Tokyo you are never more than a few steps away from one!

Shibuya  station is well served by the F,G and the Z metro lines as well as the JR  Yamanoto Line  making it easily accessible from any part of Tokyo. One could spend an entire day exploring Shibuya station alone and the two connected department stores. The station is a foodie haven and a  great place for some retail therapy. And this  true of many a station in Tokyo and Japan.

Just outside Shibuya station is a  statue of Hachiko; erected in memory of a loyal and faithful dog. Hachiko was a pet of a Japanese professor who would receive his master each day on his return from work at Shibuya station  and continued this practice for many years even after the master’s  death. The statue was neither  impressive  in size nor on  aesthetics but it provided a familiar context for Malati and me as we had repeatedly watched the Richard Gere  tearjerker movie Hachi  based on the story. One of the exits from Shibuya station is named Hachiko exit! 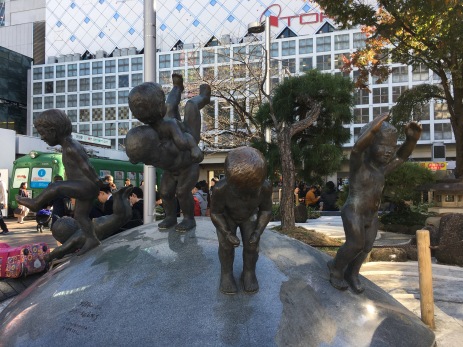 We were so disappointed with the  statue that  Malati believed that it did not even warrant a photograph! We were of the view that the statue next to Hachiko was a better work of art  but lost out to Hachiko due to the   sentimental connect. So much so that we do not remember the name of this beautiful statue or the history behind it. Neither could internet help us.

Hachiko overlooks the much vaunted   Scramble Crossing which has now become a must see attraction for tourists to Tokyo. Huge crowds  make their way across the five  pedestrian crossings simultaneously. In terms  of crowds I have seen

larger ones outside Churchgate in  Mumbai  but what distinguishes Shibuya crossing is the coordinated stoppage of all traffic on all five  roads simultaneously and the attendant surge of people. This is then followed  by the  sequential operation of lights for  vehicular traffic management. One can view the crossing from many different points but the best view is from the Starbucks across the road from Hachiko exit. Needless to say the coffee shop is crowded at all times of the day but well worth the wait for a cup of coffee and the view. And a great idea to do it both during the day and night.

Shibuya means different things to different people. It is a foodie haven. Great for shopping. And night life. And bars. And great department stores,  gardens and shrines. After spending some time at the scramble crossing

we walked across to the Starbucks for a higher level view and then set out in search of a vegetarian restaurant. Reviews rated “We Are The Farm”  as the best vegetarian restaurant in Shibuya (check out my review on Tripadvisor). We walked past the shops and restaurants  and  spent a while admiring   the conveyor belt Sushi  restaurant. Across the alleys and the bars past Koen Dori and onto Bunkamato Dori to the restaurant. A longish walk took us through the by lanes  of Shibuya- Not the shortest of routes. The meal was totally vegetarian and we were not disappointed.  Organic juice followed by a   bowl of soup and fresh veggie salads topped off with a   gratin. Yes it is possible to get a great vegetarian meal even in Japan. Shibuya is a shoppers paradise and there are a number of stores such Don Quixote, BIC camera and the like  but we headed  to the two large clothing stores in Shibuya – H&M and UniQlo  to equip ourselves with some warm clothing.  Tokyo was much colder than we imagined! A few sweaters and inners and we had enough for the day.  My aching feet didn’t permit but I would have loved to take stroll to the nearby  Yoyogi park.  A good couple of hours were spent in Shibuya  and we set out on the return journey from Shibuya station  to the hotel with a pit stop at Dunkin Donuts. We tapped the Suica card and the turnstile opened –  We were now  experienced tourists !!